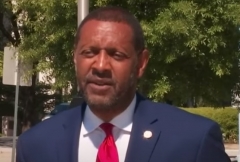 “Pres. Trump is the last man standing between chaos and community,” Rep. Jones told Fox News over the weekend, warning that the leaders in his party have moved dangerously to the left:

“They have really taken our country in the wrong direction. They want socialism, they want Marxism. We can’t tolerate that.”

“We have to protect our state and the president is still trying to help us retain those two United States senators, so we can hold the line and we can have balance in Washington.”

It’s hypocritical that Abrams, who founded a group to expose voter suppression (Fair Fight Action) isn’t calling attention to the reports of voter fraud and election-rigging in Georgia, Rep. Jones said. There have simply too much evidence suggesting elections have been stolen, he says:

“There has been no clear fair, free and transparent election. There’s been too many issues, too many irregularities.

“And I don’t understand why Stacy Abrams and that ‘Fair Fight’ group, that they’re not standing up now and talking about this. They talked about it when she lost a few years ago, how they should be for the people, by the people, every vote should be counted.

“And she’s practicing, I would say, hypocrisy and not democracy.”

Democrat Jones says he’s endorsing the two Republican Senate candidates in Georgia’s upcoming runoff elections – because, if they don’t win “It’s going to be chaos, it’s going to be communism”:

“And so, I want to see like many of us what to see, Georgia hold the line and Sen. David Perdue and Sen. Kelly Loeffler, they must be reelected. If that doesn’t happen, it’s going to be chaos, it’s going to be communism. Black Lives Matter, Antifa are going to run over Joe Biden.”