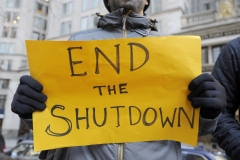 “Americans' latest assessment of their mental health is worse than it has been at any point in the last two decades” as Americans continue to suffer the effects of isolation and worries about the coronavirus pandemic, Gallup reported Monday.

The percentage of Americans reporting a positive assessment (“good” or “excellent”) of their mental health had never fallen below 81% in any year since Gallup began polling the topic in 2001 – until this year, when it recorded a nine-point drop to a record-low 76%.

“The latest weakening in positive ratings, from a Nov. 5-19 poll, are undoubtedly influenced by the coronavirus pandemic, which continues to profoundly disrupt people's lives,” Gallup reported. Politics and race relations may also have had a negative effect, Gallup notes.

The Trump Administration has repeatedly warned of the negative mental health effects of government-mandated business shutdowns and stay-at-home mandates. “A hotline run by the substance abuse and mental health services saw a 1000% increase in responses during April as we kept this country closed,” White House Press Secretary Kayleigh McEnany warned in a press event earlier this year.

McEnany also warned that many Americans have become afraid to go to the doctor, which could have deadly consequences:

“According to the IQVIA Institute for Human Data science, a total of 80,000 plus diagnoses of five common cancers in the United States are projected to be missed or delayed during the three-month period of early March to early June.”

“We can’t scare people from going to hospitals. It's a consequence of staying closed though.”

In October, President Trump signed an Executive Order addressing the negative impact of prolonged shutdowns on mental and behavioral health. Anxiety, depression, thoughts of suicide and other mental health problems has significantly increased due to COVID-19 restrictions and worries, the White House reported in a press release announcing the executive order:

“According to a CDC study, symptoms of anxiety and depression increased significantly since the prolonged stay-at-home orders, with disproportionately worse mental health outcomes among vulnerable groups.

“In July, a Kaiser Family Foundation poll found that 53% of American adults reported that their mental health was negatively affected due to worries over COVID-19.”