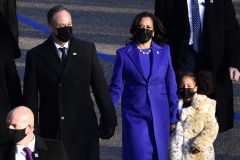 Vice President Kamala Harris kissed her husband goodbye before she boarded Air Force Two on Tuesday – both wearing coronavirus masks, even though both have been fully vaccinated.

Harris was departing from Andrews Air Force Base in Maryland as she and Second Gentleman Doug Emhoff kept their masks on their faces as they engaged in an on-camera kiss.

Harris and her husband received their first COVID-19 vaccination shots in December, with the vice president using the event as a photo-op. Then, in January, both received their second doses during a press event reported by People magazine:

“Harris, 56, is now fully vaccinated along with President Joe Biden, who received his second and final dose of the vaccine earlier this month.”