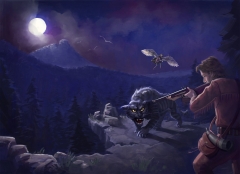 Daniel Boone faces down a Wampus Cat in "Mountain Folk."

“Mountain Folk,” a historical fantasy novel about the Revolutionary War by John Hood, celebrates America’s founding and its iconic heroes by blending real-life characters and events with elements of magic, myth, and mountain folklore.

The book, set for release on June 8 of this year, is an epic fantasy in the genre that brought readers “The Hobbit” and “The Lord of the Rings.” And, while it features Revolutionary War exploits by real-life historical figures such as Daniel Boone, George Washington, Thomas Jefferson, and Alexander Hamilton, it incorporates demons, dwarfs, winged fairies, armored pixies, and a monstrous, blue-scaled serpent.

“We need now, more than ever, to celebrate American heroes,” Hood, a Public Policy adjunct instructor at Duke University and president of the conservative John William Pope Foundation who has authored seven non-fiction books, tells CNSNews.com.

While America’s heroes have human flaws that shouldn’t be ignored, their admirable accomplishments should still be celebrated and serve as an inspiration to us all, Hood says:

“Yes, figures such as George Washington and Daniel Boone were imperfect. We should learn as much as we can about them, warts and all. But, we should still admire the important contributions they made to the founding and growth of our country, even as we properly integrate a broader variety of stories, about a broader variety of heroes, into the American saga.

“Although my novel has many non-human characters, I actually use them to illustrate the inescapable realities of human nature. We are all fallen creatures. We yield to temptation. We make mistakes. Even the best of us, if entrusted with great power, may end up abusing it, insisting all along that our noble ends justify ignoble means.”

Hood says decided to create “Mountain Folk” as an epic fantasy because readers of all ages often retain more historical knowledge from folklore and fiction than from textbooks or non-fiction. The title, he explains, is derived from the prevalence of mountain peaks in folklore and fantasy, and from the way his characters refer to one another as “folk” (Wee Folk, Mountain Folk, etc.).

His favorite human character in the book is Daniel Boone and his favorite magical character is a sylph (air spirit) fairy named Goran, because both are forced to grapple with the conflict of having to choose between their loyalties (such as that to the king) and their devotion to their principles that inspired a new nation.

Though fantasy, “Mountain Folk” also has a faith component that was inspired by the works of authors like J.R.R. Tolkien and C.S. Lewis, Hood says.

In a series of short videos on his “Mountain Folk” YouTube channel, Hood introduces his audience to some of the historic locations, American heroes, and magical creatures featured in his novel. In episode four, for example, he describes the Wampus Cat, the Tatzelwurm, and the Jersey Devil – and explains how only the “sighted” can see the winged fairies in his book.

In contrast, the fifth episode looks at some of the historic homes featured in the story, including Thomas Jefferson’s Monticello, George Washington’s Mount Vernon, Daniel Boone’s log cabins, and the homes and council houses of the Cherokee.

Information on obtaining a copy of “Mountain Folk,” including pre-ordering through Amazon and Barnes & Noble, is provided on the book’s website, https://mountainfolkbook.com/.