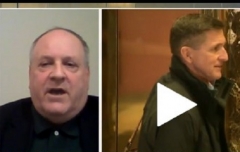 Former President Barack Obama, a Harvard Law graduate, should’ve known better than to say former National Security Adviser Gen. Michael Flynn had been charged with perjury and that Flynn got off “scot-free,” a former federal prosecutor with 35 years of experience said Tuesday.

Appearing on Fox & Friends, former Federal Prosecutor Doug Burns took issue with comments Obama made in a taped phone call to his supporters on Friday. In the call, Obama decried the Justice Department’s decision to drop the case against Flynn, saying:

“There is no precedent that anybody can find for someone who has been charged with perjury just getting off scot-free.”

First of all, Burns said, Pres. Obama’s claim ignores the history and context – and credible charges of the Justice Department’s own misconduct, Burns said:

“It ignores the history and context of the entire matter: which is that it was his DOJ, which stands now credibly charged with violating protocol, setting up the general, not warning him of his rights, you don’t need me to go through the whole litany.”

“And, the other thing, guys, really quick: to call it ‘scot-free’ – really surprising, me having done white collar and other criminal law for 35 years.

“’‘Scot-free?’ Financial devastation, loss of career, loss of reputation – you know, so the ‘scot-free’ seems to be a surprising comment.”

Another thing a Harvard Law School graduate like Obama should have known is that Flynn had not been charged with “perjury,” but with making a false statement to a federal agent:

“It’s not technically perjury It might be slightly unfair to draw that distinction. But, after all, he’s a graduate of the Harvard Law School, so he should know that it’s not perjury, it’s a false-statement case.”

“As far as the hypocrisy, it’s breathtaking,” Burns said, noting, in example, how former FBI Deputy Director Andrew McCabe has criticized the decision to drop the Flynn case – when Flynn narrowly escaped being charged with lying:

“You have Andrew McCabe weighing saying that he can’t believe that the Flynn case was dropped – when he came this close to being charged with lying, himself.”