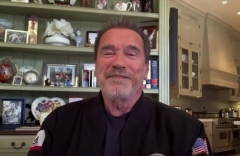 As a biological male, Jenner won the 1976 Olympic gold medal in the decathlon for the U.S., but now “identifies” as a female and has entered the race as a Republican vying for California’s governorship.

Schwarzenegger, who won the governor’s seat in a recall election, was asked during an interview on ABC’s Jimmy Kimmel Live! if he thinks Jenner has “any chance” of winning the recall election.

“Anyone has a chance because I think that the people are dissatisfied with what is going on here in California,” the actor said, adding that it would be “fun” if many more candidates entered the race:

“And I hope as many people as possible are jumping into the race and going for it because, remember, when I was in the recall election, there were 150 candidates there and it was a huge circus.

“It was kind of fun to run for governor at that time. It would be fun this time too for everybody.”

“I predict right now there will be another hundred candidates. I think so,” Schwarzenegger predicted.

While it’s important to communicate “a clear vision” of goals, “the press will attack you no matter who you are,” he advised potential candidates. Schwarzenegger said the press even attacked him, but that didn't keep him from winning:

“The key thing about all this is — it doesn’t matter if it’s Caitlyn or if it’s anyone else — to have a clear vision of where you want to go, what are the kind of changes you want to make and why are you qualified to become governor.”

“This is what you have to convince the people, all the other stuff is all nonsense, because the press will attack you no matter who you are. They attacked me – but, in the end, I won.”