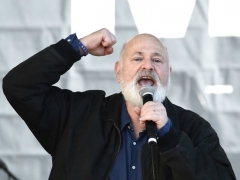 As president, Donald Trump “led a deadly attack” against the U.S. government – and any senator who disagrees is a seditionist, liberal Filmmaker Rob Reiner declared Monday.

Trump “committed the single worst Crime against Democracy in our Nation’s history,” Reiner tweeted, referring to Trump’s pending Senate trial - warning that “Any Senator who says otherwise is a Seditionist”:

“The case against Donald J. Trump is Open and Shut. He committed the single worst Crime against Democracy in our Nation’s history. He led a deadly attack on the US Government to overthrow the Will of the People. Any Senator who says otherwise is a Seditionist.”

At the heart of Trump’s pending Senate trial is the charge that his publicly-expressed belief that the 2020 presidential election was stolen. In a tweet last Friday, Reiner called for a Congressional resolution declaring that Pres. Joe Biden’s election was legitimate:

“Two Resolutions need to be presented to Congress. One would state that the 2020 Presidential election was not stolen. The other would ask Members to disavow White Nationalism. Every elected official needs to be on the record.”