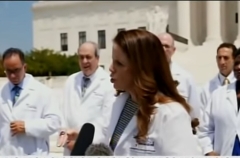 Dr. Simone Gold, a board-certified emergency physician who appeared in a viral video banned from social media for documenting the potential of hydroxychloroquine in combating coronavirus, said Thursday that she has hired attorney Lin Wood to defend her from defamation.

At the end of her appearance on Tucker Carlson’s Fox News Channel program, in which she described the backlash she’s faced because of the once-viral video, Dr. Gold said she hopes people will stop saying negative things about her:

“We’ve hired Lin Wood to help me in this matter. And, I hope that puts to rest anything people might say that’s defamatory.”

Wood’s successes include his representation of Nicholas Sandmann who, as a high school student, was vilified by media for an encounter he while wearing a “Make America Great Again” following a pro-life rally, NewsBusters reports:

“After settling with CNN six and a half months ago, Sandmann announced Friday (and on his 18th birthday) in a tweet he’s settled a defamation suit with The Washington Post for their coverage after he was confronted on January 18, 2019 at the National Mall by far-left Native American activist Nathan Phillips.”

Earlier in the interview, Carlson played a clip from Gold’s banned video. “We’re allowed to share it here because we don’t work for Google or Facebook,” Carlson declared.

“They’ve been empowered to overrule the doctors’ opinion.”

In her interview with Carlson, Dr. Gold encouraged Americans to look at the science behind hydroxychloroquine by reading an online white paper prepared by doctors documenting the drug’s legacy and effectiveness.

Americans should question why an FDA-approved drug that’s been in use for 65 years and was given to the troops of Pres. George Washington is now been so viciously attacked, Gold said:

“I don’t want anyone to just believe me because I’m saying it. We’ve put together a white paper that has all the science. It’s utterly irrefutable that hydroxychloroquine is safe. That’s without question. And, there’s tons and tons of studies to show now that it’s quite efficacious

“You’ve got to kind of wonder why we’re still talking about an FDA-approved medication that’s been around for 65 years. It’s been around since long before George Washington gave it to his troops. Why are we still discussing it? It’s a little bit strange.”