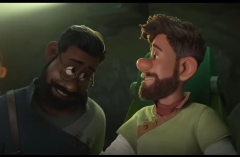 “Strange World,” Disney’s new animated movie for kids – featuring a gay lead character and a heavy-handed anti-fossil fuels message – looks to lose at least $100 million, based on its dismal box office performance in the five days since its Thanksgiving opening.

Not even Disney+ and home entertainment platforms can save “Strange World” from losing money, trade magazine Variety reports:

“Even with proper attention on Disney+ and home entertainment platforms, box office experts suggest it’ll be difficult to get the big-budget film into the black. Since ‘Strange World’ cost $180 million to produce and tens of millions more in global marketing and distribution fees, the film needs to gross roughly $360 million to break even, sources say.”

Anemic international theater ticket sales of $9.2 million don’t bode well for the film, either. In addition to lackluster overseas appeal, the film is also banned in the Middle East, Malaysia and Indonesia, due to its LGBTQ content, and won’t be shown in either China or Russia.

In terms of content, the movie is deemed “shockingly progressive” by the far-left publication, The Daily Beast:

“Strange World boasts not only a queer teen lead, voiced by IRL queer comedy icon Jaboukie Young-White, but that queer teen is also biracial. Between the explicit queerness and the interracial family at its center, Strange World is shockingly progressive—well, as far as Hollywood family films go.”

Likewise, The Guardian touts “Strange World” as “The first animation from the entertainment giant to feature an openly gay teen, about an end-of-days environmental disaster.” “The fact that Strange World is so triggering for the religious right might be its biggest treat,” the review gloats.

The poor performance of the film appears to add more credence to the “Get Woke, Go Broke” adage, which contends that changing a product and sacrificing quality in order to pander to and promote far-left (“woke”) ideology has disastrous financial results.

“As CBN News has reported, long considered the place to turn for family-friendly entertainment, recent moves and statements by the Walt Disney Company indicate a turn toward a cultural agenda that threatens that legacy and possibly its future,” a Christian Broadcast Network article notes.

The eco-storyline, revolves around a plant-based power source called pando, which turns out to have dire environmental consequences.

As Christian Answers reports, the anti-fossil fuel propaganda is undeniable – especially since the film’s director acknowledges it:

“To the discerning eye, the analogy here is plain: Pando = petroleum/oil/fossil fuels. Fossil fuels, the movie (and liberals) argue, is killing our planet (Mother Earth/Gaia). The only way to save our planet, then, is to go back to the way things were before we started using fossil fuels, or to embrace Green sources of energy.”

“But don’t just take my word for it. Director Nguyen says, ‘Two things that are always a battle are the conveniences of today versus the need for tomorrow. If we lost certain energy sources, it would make things harder, but ultimately might be better for the world and make the future last.’ There you have it; the movie is conditioning our children to prepare for less convenience and more hardship in the future.”