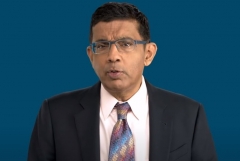 Identity socialism has taken hold of America by dividing people based on identity groups and creating new classes of heroes and villains, conservative Author and Filmmaker Dinesh D’Souza explains in a PragerU video.

In his video titled “What Is Socialism?” D’Souza says that identity socialism promotes division by defining who is “in” and who is “out” in American society:

“One may think this is all part of the politics of inclusion, but to think that is to get only half the picture. The point, for the left, is not merely to include but also to exclude.”

D’Souza says identity socialism was promulgated by three main types of “Marxist transposition,” which substitute Marxism’s traditional hero, the “working class,” with identity groups – and replaces the “capitalist class” with other villains, such as whites, men and the American government:

“The new working class were the Vietnamese ‘freedom fighters.’ The evil capitalists were American soldiers serving on behalf of the American government.”

“Through another Marxist transposition, ‘blacks’ would become the working class, ‘whites’ the capitalist class.  Race, in this analysis, took the place of class.”

“[Women] could be taught to see themselves as an oppressed class. This of course would require a further Marxist transposition: ‘women’ would now be viewed as the working class and ‘men the capitalist class; the class category would now be shifted to gender.”

Identity socialism has employed a long-term strategy to perpetuate itself, D'Souza says. By turning radical students into radical professors who teach its ideology to impressionable students, Identity Marxism could permeate American society to the point that “Even big business, the hated capitalist class itself, would succumb”:

“The university could produce a new type of culture, and that culture would then spill into the larger society to infect primary education, the news media, and entertainment. Even big business, the hated capitalist class, itself, would succumb.”

As a result, “Identity socialism has arrived,” D’Souza concludes.