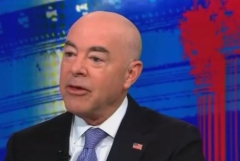 Appearing on CNN’s “State of the Union with Jake Tapper and Dana Bash,” Co-host Bash noted that Republicans are warning of the “Orwellian” nature of the board. She, then, asked Sec. Mayorkas about the function of the Disinformation Governance Board.

Mayorkas said that the board will address “the connectivity between threats and acts of violence,” but won’t infringe on free speech:

Bash: “It's still not clear to me how this governance board will act. What will it do?”

Sec. Mayorkas: “So, what it does, is it works to ensure that the way in which we address threats, the connectivity between threats and acts of violence are addressed without infringing on free speech. Protecting civil rights and civil liberties. The right of privacy. And the board, this working group, internal working group, will draw from best practices and communicate those best practices to the operators, because the board does not have operational authority.”

Bash, then, asked if “American citizens will be monitored.” “No,” Mayorkas replied.

Asked to “guarantee that,” Mayorkas declared that those in the DHS don’t monitor U.S. citizens:

“So what we do, we in the Department of Homeland Security don't monitor American citizens.”

However, a September 20, 2021 U.S. Inspector General’s report titled, “CBP Targeted Americans Associated with the 2018–2019 Migrant Caravan,” says DHS’s Customs and Border Protection (CBP) has done just that, by placing “lookouts” on “U.S. journalists, attorneys, and others” – for “legitimate reasons”:

“CBP officials had legitimate reasons for placing lookouts on U.S. journalists, attorneys, and others suspected of organizing or being associated with the migrant caravan (caravan associates).  However, many CBP officials were unaware of CBP’s policy related to placing lookouts and therefore may have inadvertently placed lookouts on these U.S. citizens, which did not fully comply with the policy.  Additionally, CBP officials did not remove lookouts promptly once they were no longer necessary.  As a result, CBP subjected some of these individuals to repeated and unnecessary secondary inspections.”

In particular, the inspector general examined the cases of 51 U.S. citizens who had “lookouts” placed on them:

“To further assess whether CBP placed lookouts for legitimate or retaliatory purposes, we also reviewed the specific circumstances of the lookouts on 51 U.S. citizens, and the secondary inspections that resulted from these lookouts.”

Likewise, according to an October 2, 2021 report by The Oregonian, an internal review by the DHS says officers “compiled intelligence and background reports” on citizens, particularly journalists, in connection with the 2020 riots in Portland, Oregon:

“Federal Homeland Security officers compiled intelligence and background reports — dubbed 'baseball cards' — on people arrested by federal authorities in Portland during protests last summer, despite their charges being unrelated to national security threats, according to an internal review made public Friday.”