Dershowitz: Biden ‘Should Come Out as Strongly as Possible Against the Squad’s Bigotry, Anti-Semitism and Racism’ 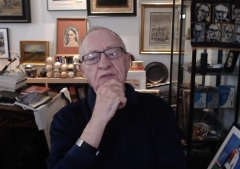 “A racist is a racist and a bigot is a bigot. It doesn’t matter whether you’re a bigot of the Left or a bigot of the Right,” iconic liberal Harvard Law Professor Emeritus Alan Dershowitz says, calling on President Joe Biden to do something that takes true courage: condemn the bigotry of the Left.

In his Tuesday podcast, The Dershow, the iconic liberal civil rights lawyer and Constitutional Scholar says that Pres. Biden did a very good thing by visiting Buffalo, New York, to speak after the recent mass shooting that took place there in a predominantly Black community.

But, that was the easy thing to do, Dershowitz says:

Biden needs to take the next – and more difficult – step, by going to other cities and calling on Black leaders to denounce Black-on-Asian and Black-on-Jewish crime, Dershowitz says:

“And he has to talk to Black community leaders and others in the Black community and say, ‘White supremacy is wrong; we all know that (clap, clap, clap, clap) but, African-Americans must stop – I’m talking about individuals, I’m not talking about any group – must stop attacking Asian-Americans, must stop attacking Jewish Americans.’ Today, there has been Black-on-Asian crime in Los Angeles and in New York and in other places, and Black-on-Jewish crime in Los Angeles and New York and other places.”

In particular, Biden should also call out radical Democrats in Congress, like those who call themselves “The Squad,” who represent “bigotry, anti-Semitism and racism,” Dershowitz says:

“For example, there’s now some kind of a law being proposed by the Squad in Congress, a group of bigoted anti-Semites running under the label of Democrats, that would, basically, attack the origins of Israel, saying that it’s the cause of the whole problem.

“President Biden has to attack that. That’s bigotry; that’s a blood libel.”

“Unless and until you do that, you’re just a selective condemner of bigotry and racism,” Dershowitz tells Biden.

It requires courage to publicly condemn racism from all sides, Dershowitz said:

“Read ‘Profiles in Courage,’ by John F. Kennedy, and you’ll understand what it means to have courage.