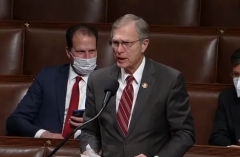 “The reckless policies coming out of this White House, and the Democratic Party as a whole, have put you and your families in grave danger,” Rep. Brian Babin (R-Texas) warned in a House floor speech Tuesday.

“It’s not hard to see where the left’s demonization of law enforcement and the decision to gut police department funding has gotten us.

“Thanks to the Democrats, we are now in the midst of a crime wave with record high homicide rates in more than a dozen major cities across this great country of ours. The city of Chicago alone saw at least eight hundred homicides in 2021 – a number that we haven’t seen in decades.

“Bad policies lead to bad consequences. And, folks, we are living these in technicolor.

Babin gave the example of how criminals charged with capital murder were released on bond and went on to kill again in one Texas county last year:

“Innocent Americans are being hurt and killed by this foolhardy Democrat policy,” Rep. Babin warned.