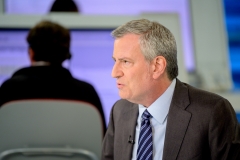 As gun violence and murders continued to spike in New York City, Democrat Mayor Bill de Blasio declared Wednesday that his city is “safe” and “better” because the number of criminals in jail is at the lowest level since 1946.

Mayor de Blasio made the claim at a signing ceremony for six new police reform bills:

“People said that if we reduced incarceration and ended the era of mass incarceration, we would be endangered. It was the other way around, my friends. We now have fewer people in our jails than any time since World War II and we are safer for it and better for it.”

But, as CNSNews.com has reported, the number of murders, shooting, and burglaries in New York City all jumped in June:

“According to the NYPD, there has been a 130 percent increase in the number of shooting incidents across New York City between June 1 and June 30 compared to the same time last year. The number of people murdered increased 30 percent, and the number of burglaries rose 118 percent. The number of auto thefts rose 51 percent.”

Last weekend, 35 people were shot in the city, up from just five a year earlier, Fox News reports:

“Thirty-five people were shot as a result of those shootings, which took place between Friday and Sunday -- a sharp rise over the same period last year when only five shootings with six victims were reported.

“This weekend's shootings left a 1-year-old baby boy dead, the only homicide. The child was shot during a cookout.”

New York Democrat Rep. Alexandria-Cortez, who advocates defunding the police, even after a one billion budget cut, acknowledges that the city has experienced a slight rise in crime – but, she attributes it to shoplifters stealing bread.

De Blasio made his claim that fewer incarcerations make for safer citizens in the following comments as he listed past police reform measures instituted in New York:

There will always be people who say that these things cannot be done. I remember very vividly in 2013 – if you looked at what we were hearing day after day in 2013, you would have imagined it would have been impossible to end the broken and unconstitutional policy of stop and frisk. We were sold a bill of goods. We were lied to every day, being told that if we ended that policy, there would be crime and chaos everywhere. And, thank God, most of us didn’t listen to that hype. We changed something unjust and we became a fairer city. And guess what? We became a safer city at the same time, because fairness and safety have to walk hand in hand. People said that if we reduced incarceration and ended the era of mass incarceration, we would be endangered. It was the other way around, my friends. We now have fewer people in our jails than any time since World War II and we are safer for it and better for it.

So, every time we do these things, we are saying Black lives matter in a tangible and real way. Now, we’ve only begun and we have to do more, because Rory makes a powerful point – the day has to be – and it may seem hard to imagine, but it is what we are aspiring to – the day has to come where every interaction a New Yorker has with a police officer is filled with neutral respect. That is what neighborhood policing is building. And Vanessa knows, you’ve been front and center in the effort to build neighborhood policing. It be done, and these bills will help us do it, because they will create more trust and more accountability.