Dana Loesch: 5 Things the ‘Gun Lobby’ DIDN’T Do; 3 Things ‘Not a Single Politician Is Asking’ About Texas Shooting

Instead of blaming the millions of law-abiding gun owners in the U.S., Democrats should be focusing on the actual root causes of mass shootings, author and Radio Host Dana Loesch said Tuesday after a horrific shooting at a Texas elementary school killed more than twenty people.

Tuesday evening, President Joe Biden blamed the "gun lobby," the reflexive response of those who believe gun bans are the solution to mass shootings.

In a series of tweets following Biden’s claims, Loesch said that Democrats’ ire is misplaced, listing five things the “gun lobby” didn’t do to cause the Texas shooting:

“The ‘gun lobby’ didn’t neglect to monitor his behavior,

“The ‘gun lobby’ didn’t neglect to secure the school,

“The ‘gun lobby’ didn’t leave any doors unlocked, and

“The ‘gun lobby’ didn’t tell him to murder anyone.”

Instead of blaming legal gun owners, Democrats should be looking at the influences that shaped the individual who was personally responsible for the shooting, Loesch tweeted:

“If you’re going to insanely blame someone for the actions of an 18 year-old criminal who lived at home and dropped out of school, START IN THE HOME and not the millions of law abiding people who carry every single day without issue.”

“Not a single politician is asking” three important questions about the Texas shooting, Loesch tweeted:

“(1) How did this murderer get into the school?

“2) What security did this school have and how can we protect schools like we protect our concerts, banks, museums?

“3) WHERE WERE HIS PARENTS AND THE ADULTS IN HIS LIFE?” 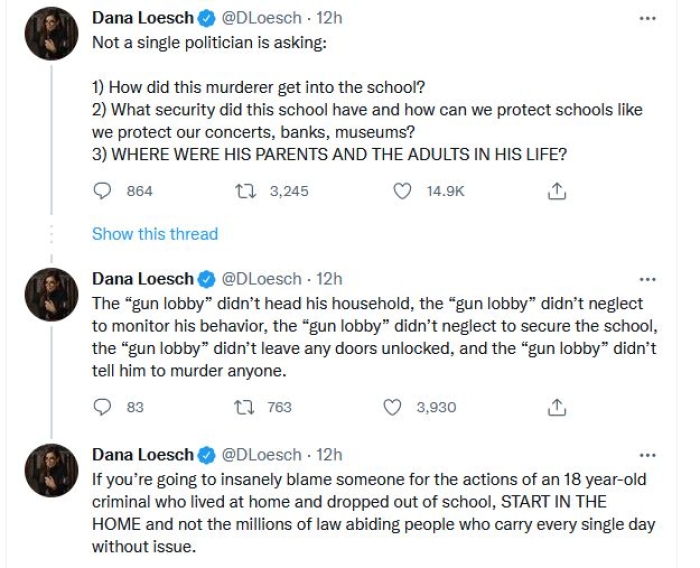