Congresswoman: God Will No Longer Protect Us if We Pass Law Allowing Abortion Up Until Baby’s Birth 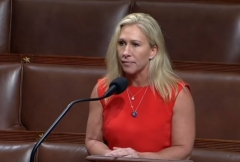 God will stop protecting America through His grace if the U.S. becomes a nation where federal law makes it legal to abort an unborn child at any point during pregnancy, Rep. Marjorie Taylor Greene (R-Ga.) warned on Tuesday.

In remarks on the House floor, the congresswoman implored her colleagues to vote against the so-called “Women’s Health Protection Act (H.R. 3755) when it comes up for a vote this week.

If Congress truly adheres to the declaration “In God We Trust” adorning its walls, then it will “reject this evil bill,” the congresswoman said:

“Heading into this week, perhaps the most evil and disgusting thing that is going to happen in this 117th Congress is the bill that is going to be introduced that makes it a federal law to allow abortion up until the day of birth.

“This wall says, ‘In God We Trust’ – and, if that is the case, then this Congress will reject this evil bill and protect the innocent unborn.”

But, if America rejects God’s commandment to protect innocent life, it will suffer the consequences, Rep. Greene warned:

“If this nation becomes a nation where we have such a federal law that can kill a baby up until the day of birth, then God will no longer provide protection in his grace over America.”

“This deceptively-named, extreme bill would impose abortion on demand nationwide at any stage of pregnancy through federal statute,” the United States Conference of Catholic Bishops (USCCB) says in a letter to Congress condemning the Democrats’ bill.

“Even worse, it would eliminate modest and widely supported pro-life laws at every level of government -- the federal, state, and local level -- including parental notification for minor girls, informed consent, and health or safety protections specific to abortion facilities,” the bishops say.

H.R. 3755 would “force health care providers and professionals to perform, assist in, and/or refer for abortion against their deeply held beliefs, as well as force employers and insurers to cover or pay for abortion," the USCCB statement says.

“The details of this radical bill are more fully documented in this fact sheet.”