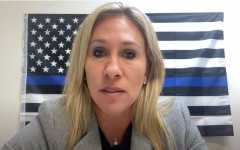 In a Twitter post, Greene called the foreign aid in the bill passed by Congress “the biggest F you to the American people”:

Any COVID relief package should contain only one thing: “a simple direct payment to legal Americans,” Greene said in her next post.

After that, every “know it all” in government and politics should just go back to work – and let the American people do the same – she said in her next post:

“Any type of #COVIDReliefPackage should look like this. A simple direct payment to legal Americans. Then every single government entity, elected official, and know it all needs to sit down, shut up, and go back in their office and let America GET BACK TO WORK! Problem solved.”

President Donald Trump has suggested that he will veto any stimulus package that doesn't provide more money to the American people and less to pork projects.