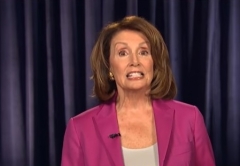 On Wednesday, addressing claims that President Donald Trump should be impeached for inciting a violent insurrection by his speech at a D.C. rally last week, a congressman reminded his Congressional colleagues of House Speaker Nancy Pelosi’s (D-Calif.) incendiary rhetoric.

“I just don’t even know why there aren’t uprisings all over the country. Maybe, there will be,” Rep. Louie Gohmert (R-Texas) quoted Pelosi.

Pelosi made the comment back on June 14, 2018 while addressing the plight of illegal alien families separated at the border, suggesting that uprisings might be the only solution to the Trump Administration’s “policy”:

“I just don’t even know why there aren’t uprisings all over the country. Maybe, there will be, when people realize that this is a policy that they defend. It’s a horrible thing.

“Now, on our side, we didn’t take those to be impeachable, because we didn’t believe she surely meant that. But, by the Democrats taking this action, you’re telling me, ‘No, when we say those things, we actually mean to incite violence.’ That’s what this action is saying.”

Gohmert warned of the dangers of this type of politically-motivated impeachment: