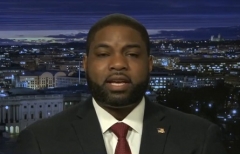 Americans want the chance to succeed, but they don’t want politicians telling them how they’re allowed to do it, “Freedom Force” Congressman-Elect Byron Donalds (R-Fla.) says.

Byron, a member of a group of House Republicans calling themselves the “Freedom Force,” says the troupe seeks to counter the far-left “Squad” led by Rep. Alexandria Ocasio-Cortex (D-NY) by restoring Americans’ freedom from government overreach.

The 2020 elections, in which Republicans gained seats in the House, shows that “Americans just want to be left alone,” Donalds said Monday in an interview on Fox News Channel:

“If you really look at these elections in 2020, what’s clear is that Americans just want to be left alone.

“They want smart policies. They want to follow the Constitution. They want freedom.”

“Americans just want to have opportunities to succeed. They don’t want people in Washington telling them how they’re going to go about doing that. They want to have the freedom to choose for themselves, and I’m here to fight for that – and that’s what the Freedom Force is here to do.”

“The people in this Capital aren’t smart enough to make those decisions for them,” Donalds declared when asked what he plans to do once he takes office:

“The plans are simple; it’s never really changed. It’s about supporting the Constitution. It’s about making sure that we actually have bills, policies, laws that make sense for all Americans.

“It’s about making sure that our businesses have freedom to operate, that our families have the freedom to choose what they’re going to do in their lives – and the people in this Capital aren’t smart enough to make those decisions for them.”