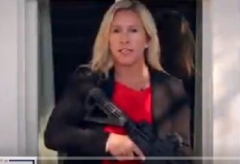 “I have a message for ANTIFA terrorists,” Marjorie Taylor Greene says while holding a semi-automatic rifle in an 18-second video on her Congressional campaign Twitter page.

Greene’s message to domestic terrorists: “Stay the hell out of northwest Georgia. You won’t burn our churches, loot our businesses or destroy our homes”:

“I have a message for ANTIFA terrorists: stay the hell out of northwest Georgia. You won’t burn our churches, loot our businesses or destroy our homes.

“I’m Marjorie Greene and I approved this message.”

If you want to see ANTIFA removed from our streets for good, help me get elected!

Please consider chipping in below!

Before her decision to run for Congress, Greene made headlines last year when her WhiteHouse.gov petition to “impeach” House Speaker Nancy Pelosi (D-Calif.) garnered more than a quarter-million signatures.

The petition, which is now closing in on four hundred thousand signatures,  argues that House Speaker Nancy Pelosi (D-Calif.) is a traitor to the United States because she provides support to its “enemies” - illegal immigrants - by opposing border wall funding and by supporting sanctuary cities and tax-funded benefits for illegal aliens.

While the U.S. Constitution does say civil servants may be removed through “impeachment” – which must be tried by the Senate, it also says either chamber of Congress may “expel” one of its members via a two-thirds vote by the members of that chamber:

“Each House may determine the Rules of its Proceedings, punish its Members for disorderly Behaviour, and, with the Concurrence of two thirds, expel a Member.” - Article 1, section 5, clause 2

“The President, Vice President and all civil Officers of the United States, shall be removed from Office on Impeachment for, and Conviction of, Treason, Bribery, or other high Crimes and Misdemeanors.” - Article 2, section 4

“The Senate shall have the sole Power to try all Impeachments. When sitting for that Purpose, they shall be on Oath or Affirmation. When the President of the United States is tried, the Chief Justice shall preside: And no Person shall be convicted without the Concurrence of two thirds of the Members present.” – Article 1, section 3, clause 6