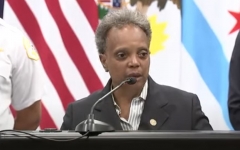 Chicago police officers turned their backs on Democrat Mayor Lori Lightfoot Saturday evening after two of their fellow officers were shot, one fatally – and Lightfoot deserved it, the president of Chicago’s Fraternal Order of Police said Monday.

As ABC 7 Chicago reports, the two officers were taken to the University of Chicago Medical Center, where “hundreds of officers gathered after 10 p.m. to stand guard and pray”:

“Three people are in custody after two Chicago police officers were shot Saturday night. One of the officers later died from her injuries.”

“A male officer continues fighting for his life Sunday. Sources tell the I-Team that the wounded officer has three gunshot wounds: One exited an eye, one lodged in the back of the head and one struck his shoulder.”

Mayor Lightfoot, who has been criticized for her lack of support for the police, used the officer’s death to promote her gun control agenda, The Blaze reports:

“Chicago Mayor Lori Lightfoot used the heartbreaking death of a Chicago police officer to advance her narrative that guns are one of the Windy City's biggest problems.”

"We have a common enemy: it's guns & the violence they bring," the mayor tweeted, responding to the news of the shootings. She, later, repeated the claim in a statement.

“For the two-and-half years that she has been mayor, she has vilified the police,” John Catanzara, president of Chicago's Fraternal Order of Police, told Fox News on Monday, noting that Lightfoot ignored being told she was not welcome at the hospital where the officer was in Intensive Care:

“The men and women of this police department have no respect for this mayor, and it was as palpable as you could possibly imagine outside that hospital at the University of Chicago two nights ago.

“The mayor was told: Do not come up to the seventh floor of that hospital and speak to the family or the officer who was still injured, fighting for his life, Officer Yanez.

“But, yet, the mayor still thought she knew best and went up there, against the advice of the family. And, the officer’s father gave her a piece of his mind and the officers up there all turned their back to the mayor - and rightly so.”