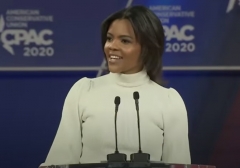 Feminists should defend Rowling because she “refuses to pretend that biological men can be women” and won’t give in to “a mob of men,” Owens tweeted Friday:

This week in transgender delusions—@jk_rowling has been bullied into returning a humanitarian award bc she refuses to pretend that biological men can be women. Essentially, a mob of men just forced a woman into submission.

“Only Maxist psychopaths believe” it’s “hateful” to say that only women can give birth, menstruate, or have miscarriages,” Owens followed up in her next post:

ONLY WOMEN CAN GIVE BIRTH

ONLY WOMEN CAN MENSTRUATE

ONLY WOMEN CAN HAVE MISCARRIAGES

ONLY MARXIST PSYCHOPATHS BELIEVE ANY OF THE ABOVE STATEMENTS ARE “HATEFUL”.

In addition to her belief that self-designated gender diminishes womanhood, Rowling has also objected to the use of “people who menstruate” to label biological women, The Daily Mail reports:

Rowling sparked controversy in June for tweeting about the use of the phrase 'people who menstruate' instead of women.

'I'm sure there used to be a word for those people. Someone help me out. Wumben? Wimpund? Woomud?', she wrote.