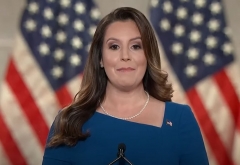 “Representative Stefanik has been a true border security champion,” National Border Patrol Council President Brandon Judd says in a statement shared by the congresswoman on Twitter.

Rep. Stefanik is the strongest member of Congress to lead Republicans’ efforts to address the border crisis created by President Joe Biden and keep illegal drugs and dangerous criminals from entering the country, the statement says:

“As President Biden’s policies continue to create the worse surge in illegal immigration in our history, it is more important than ever for our leaders to share a unified message in Congress on the importance of border security. Congresswoman Elise Stefanik is the strongest member to share and grow our message of securing the border and protecting our communities.”

“Her efforts both legislatively and behind the scenes have kept illegal drugs and dangerous criminals from flooding our communities.”

Thank you to our brave Border Patrol Officers for your endorsement! pic.twitter.com/hiqflKCbVc

“In short, Congresswoman Stefanik is a leader. She will protect the citizens of this great nation,” the endorsement says.

“She is the right leader at the right time,” Judd concludes.

“Biden’s border crisis is an absolute disaster for our country. We need strong BORDER SECURITY immediately,” Rep. Stefanik says in a follow-up tweet thanking the Council for its endorsement.