Bobulinski: “When I Saw Adam Schiff Go on Record Talking about ‘Russian Disinformation,’” I Had to Come Forward 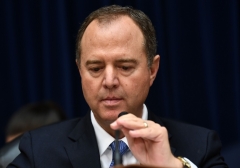 If Rep. Adam Schiff (D-Calif.) and Joe Biden hadn’t accused him of spreading “Russian information,” a former Hunter Biden business partner who has held a top-secret clearance says he would have never come forward and gone on the record detailing his foreign business dealings with the former vice president and his son.

“I’m only sitting here because, not only have they not gone on record, they've denied it and have tarred my family name, our long history of serving this country and have other congressmen now talking about Russian disinformation.”

“This whole smear on Joe Biden comes from the Kremlin,” Rep. Schiff has said, in an effort to discredit reports that, when he was vice president, Joe Biden knew of his son’s dealing.

Bobulinski called it “absolutely disgusting” that Rep. Schiff would associate him Russian disinformation and disparage his service to his country:

“I held a top-secret clearance from the NSA and the DOE. I served this country for four years at one of the most elite environments in the world, the Naval Nuclear Power Training Command - and to have a congressmen out there speaking about ‘Russian disinformation’ or Joe Biden at a public debate referencing Russian disinformation when he knows he sat face-to-face with me, that I traveled around the world with his son and his brother - to say that and associate that with my name is absolutely disgusting to me.”

Even then, Bobulinski says, he would have kept silent if Schiff had just issued a retraction – which he asked Biden family representative Rob Walker to obtain:

“When I saw Adam Schiff go on record talking about Russian disinformation after this email had been posted online by "The New York Post" - and remember that email was to me, from James Gilliard – I wasn’t blind-carboned or C.C.ed on that: it was to me stating that I was going to be the CEO of this enterprise, I was at the end of my rope.

“And so, I called Rob Walker and I told him that if that statement isn’t retracted by Congressman Schiff by midnight on Sunday that was going on record and I was disclosing all the facts to the American government, to the American citizens and the world.

“I was hoping the Bidens would do the right thing or Schiff would retract his statement, but I could not allow another minute, another hour or day for my family’s name to be associated or muddied up around Russian disinformation. So even, as I sit here today, I would ask the Biden family to come on record and stop using my name or associating it with Russian disinformation. It's absolutely disgusting.”

Bobulinski said he waited up Sunday night to see if Schiff would issue a retraction, and when Schiff didn’t, he came forward to tell his story.

Now, Bobulinski says, he’s willing to testify to Congress and discuss his experiences with the FBI and Justice Department:

“I'm not naive. I know that's not impossible to do. That's a single phone call from Joe Biden to Adam Schiff saying, basically, ‘Go on record and retract your statement. You got in over your skis.’

“I stayed up late that night, and when the statement wasn't retracted come Monday morning, I was ready to go on record and how that record was. I was willing to go in front of any senator, any congressman, the Department of Justice, the FBI, or sit here with you Tucker and, basically, provide the facts to the American people and let them make their decision. This isn't a political focus of mine. People were accusing my family of treason after I served this country and defended this country.”