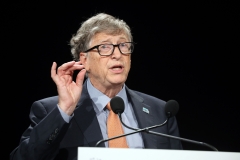 Countries that are well-off economically should give up meat entirely, billionaire Microsoft Co-Founder Bill Gates says.

Gates made the claim in an interview published Sunday in the MIT Technology Review, in which he touted his new book, How to Avoid a Climate Disaster.

Asked if plant-based and lab-grown meats “could be the full solution to the protein problem” globally caused by addressing the “highly potent emissions from burping livestock and fertilizer.” Gates said that poorer nations should be allowed to consume meat – but, prosperous nations should abstain from it entirely:

“So no, I don’t think the poorest 80 countries will be eating synthetic meat.

“I do think all rich countries should move to 100% synthetic beef. You can get used to the taste difference, and the claim is they’re going to make it taste even better over time.”

But, if citizens refuse to shun meat willfully, the government can “use regulation to totally shift the demand,” Gates said. “So for meat in the middle-income-and-above countries, I do think it’s possible.”

In those less-fortunate countries that continue to consume meat,” the solution is to “use animal genetics to dramatically raise the amount of beef per emissions for them,” Gates said.

Gates also complained about legislation requiring faux meat producers to tell consumers what they’re buying. Plant-based and lab-grown beef is harder to sell because “They don’t want us to use the beef label,” Gates said.

Gates is an investor, either personally or indirectly, in companies such as Beyond Meats and Impossible Foods, MIT Technology Review notes.