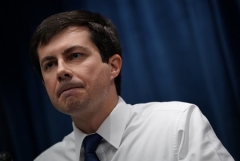 The man apparent President-Elect Joe Biden wants to head up the Department of Transportation has repeatedly called for a tax on carbon, which would result in an increase in the cost of gasoline at the fuel pump. And, carbon is just one of the things Buttigieg has said he wants to tax.

Analysis by Americans for Tax Reform (ATR), reveals that, in addition to carbon, Buttigieg said he wants to raise taxes in other ways, including:

Buttigieg’s carbon tax would increase the cost of more than just gasoline – and it would increase automatically increase each year without congressional approval, ATR notes:

A Buttigieg carbon tax would significantly increase household costs such as cooling and heating, transportation, and groceries.

Buttigieg's carbon tax plan is a large, continually ratcheting national energy tax, which would allow congress to raise taxes automatically each year without having to vote. It would require a large bureaucracy to implement and run.’

At a Democrat presidential debate last December, Buttigieg said he insists on implementing a carbon tax:

“I insist we act with a carbon tax and dividend with massive increases in renewable research on renewable energy storage and carbon storage.”

And, as Transportation Secretary, Buttigieg’s plan for a carbon tax would have the support of both President Joe Biden and Vice President Kamala Harris, ATR reports.