President Joe Biden repeatedly failed in a struggle to put a pen in his jacket pocket at a signing ceremony on Tuesday. Giving up the fight, he turned to a more cooperative pants pocket. 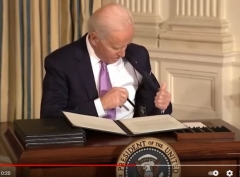 The pen proved mightier than the president at an event where he signed a host of executive orders intended to combat systemic racism. Biden appears to have accepted the defeat graciously, laughing off his failure.

Biden’s former boss, then-President Barack Obama, famously declared in 2014 that "I've got a pen, and I've got a phone," boasting that he could circumvent Congress by signing executive orders.