Biden Tells Transgenders They’re ‘Made in the Image of God;’ Bible Says God Created Them ‘Male and Female’ 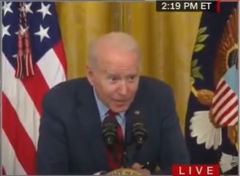 “Our entire administration sees you for who you are:  made in the image of God,” President Joe Biden tells transgender Americans in a video released Thursday.

In a video celebrating a “Transgender Day of Visibility,” Biden reassures the nation’s transgenders that his entire administration “sees” them:

“To everyone celebrating Transgender Day of Visibility, I want you to know that your president sees you – Jill, Kamala, Doug - our entire administration sees you for who you are:  made in the image of God, and deserving of dignity, respect and support.”

In his video, President Biden vowed his administration will fight against “the onslaught of anti-transgender state laws.”

“This administration is standing up for you against all these hateful bills and we’re committed to advancing transgender equality in the classroom, on the playing field, at work, in our military, in our housing and health care systems – everywhere, simply everywhere.”

Biden claims that America is experiencing an “epidemic of violence against transgender women of color and girls of color” and tells parents that they can protect the safety and health of their children by affirming their child’s gender identity.

“God bless you all. Be brave,” Biden tells transgender Americans.