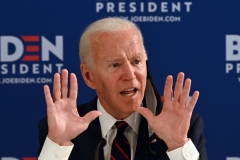 In Kenosha, Wisconsin, where tensions are running high due to the police shooting of Jacob Blake, Democrat presidential candidate Joe Biden told an audience that “They’ll shoot me,” if he lays out the details of his tax plan.

Biden made the comment Thursday while addressing an audience at Kenosha's Grace Lutheran Church:

“Nineteen corporations making a billion dollars apiece don’t pay a single penny in taxes. I’m not going to punish anybody, but everybody should pay a fair share.

“I’m not going to lay it out for you, I won’t now, because they’ll shoot me.

“But, here’s the deal. I pay for every single thing I’m proposing without raising your taxes one penny. If you make less than four hundred grand, you’re not going to get a penny tax and you’re going to get a tax cut if you make under a hundred  and twenty-five thousand dollars.”