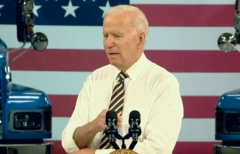 Addressing union manufacturing workers in Allentown, Pennsylvania on Wednesday, Pres. Joe Biden said that there were “three reasons” he decided to run for president – but, then, he only listed two reasons.

As he began to explain why he decided to run, Biden suddenly stopped when he realized that he had failed to introduce Pennsylvania’s governor, who was in attendance:

“When I started my campaign for president – the guv’s still, guv, I didn’t introduce you. I apologize. You’re the governor of this state and one of the best governors of the country. Thank you. You’re a good friend.”

Returning to his explanation of why he decided to run for president, Biden listed two reasons, then drifted off into a soliloquy on the value of unions, both to the country and his 1972 campaign:

“One, to restore the soul of this country, a sense of decency and honor.

“And, secondly, to rebuild the backbone of the country. Hard-working, middle-class folks who built this country.

“So, before you get upset, remember: you’re to blame,” Biden told the union workers.