Biden: Gas Prices Up $1.74 a Gallon ‘Because of Nothing Else, But’ Putin’s Invasion of Ukraine 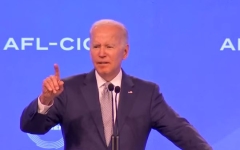 Russia’s invasion of Ukraine is the sole reason that gas prices are up, President Joe Biden claimed Tuesday.

In a speech at an AFL-CIO conference, Biden declared that Russian President Vladimir Putin’s invasion of Ukraine is the only reason that the price of a gallon of gasoline has increased $1.74 since the war began:

“I’m doing everything in my power to blunt food and gas price hikes.

“Because of nothing else, but that.”

Then, Biden spelled out his plan to do everything in his power to stop gas prices from surging: deplete the world’s existing oil supply – but, apparently, without taking any steps to allow the U.S. to increase domestic production:

As president, Biden has taken steps to thwart domestic oil production, such as canceling the Keystone XL pipeline and ending the sale of new oil leases.