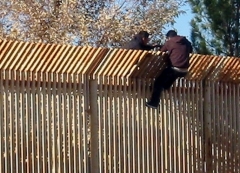 The Biden Administration has ordered U.S. Immigration and Customs Enforcement (ICE) and U.S. Customs and Border Protection (CBP) to stop using some words, and ordered them to replace them with other words.

Taking a page from George Orwell’s novel “1984,” the administration has changed the vocabulary used by ICE and CBP, mandating that they adopt language that reflects more positively to people who illegally break into the United States.

Fox News reports that it has confirmed the news initially reported by The Washington Post:

“The administration order came in the form of memos sent to the leaders of Immigration and Customs Enforcement (ICE) and Customs and Border Protection (CBP), first reported by the Washington Post.

“A Department of Homeland Security official confirmed to Fox News that several changes are being made to words that ICE and CBP will use.”

The following words are now forbidden:

Instead, ICE and CBP must say:

Liberals have long referred to illegal aliens as “undocumented aliens” – but, now, they’re not even “aliens,” they’re “noncitizens.”

Likewise, the new terms suggest that, instead of expecting illegal aliens to “assimilate” to U.S. laws and culture, American society must change in order to “integrate” and accommodate the newcomers.