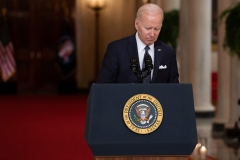 “The Biden administration finally owned up to what we have known all along,” Sen. Steve Daines (R-Mont.) said Thursday, commenting on a new Energy Department report quantifying how President Joe Biden’s cancelation of the Keystone XL pipeline has hurt Americans and the U.S. economy.

“This report responds to section 40434(b) of the Infrastructure Investment and Jobs Act (Pub. L. No. 117-58), that requires the Secretary of Energy to estimate the job losses and consumer impacts associated with the revocation of the permit for the Keystone XL pipeline,” the report notes.

Studies cited by the Energy Department report reveal that Pres. Biden’s cancelation of the construction of the Keystone pipeline had the following negative impact:

“The Biden administration finally owned up to what we have known all along—killing the Keystone XL pipeline cost good-paying jobs, hurt Montana’s economy and was the first step in the Biden administration’s war on oil and gas production in the United States,” Sen. Daines said in his statement.

“The Department of Energy finally admitted to the worst kept secret about the Keystone Pipeline: President Biden’s decision to cancel the Keystone XL Pipeline sacrificed thousands of American jobs,” Sen. Risch agreed in a statement.

“To make matters worse, his decision moved the U.S. further away from energy independence and lower gas prices at a time when inflation and gas prices are drastically impacting Americans’ pocketbooks,” Risch added.

As the report explains, Pres. Biden used an executive order to cancel construction of the Keystone XL pipeline because it wasn’t “consistent” with his climate agenda:

“On January 20, 2021, President Biden issued Executive Order 13990, Protecting Public Health and the Environment and Restoring Science To Tackle the Climate Crisis. In section 6 of the Order, President Biden stated that the KXL pipeline ‘disserves the U.S. national interest,’ as its construction and operation would not be consistent with U.S. climate goals and it would undermine the global energy and climate leadership role of the United States.

“Section 6(a) of the Order revoked the Presidential Permit to construct, operate, maintain, and connect the pipeline at the U.S.-Canada border.”

“Leaving the Keystone XL pipeline permit in place would not be consistent with my Administration’s economic and climate imperatives,” Biden said in his executive order.

However, an independent analysis quoted by the report explains that the pipeline would not only create “an immediate boost in construction employment,” but would also improve the security of crude oil supplies and the efficiency of their delivery:

“The Energy Policy Research Foundation, Inc. (EPRINC), in its independent analysis, categorized the benefits of the KXL pipeline project into the following:

“EPRINC’s 2010 analysis further noted that the KXL pipeline project would improve the security of crude oil supplies because the project is tied to long-term delivery commitments. According to EPRINC’s 2010 estimates, the KXL pipeline’s ‘net economic benefits from improved efficiencies in both the transportation and processing of crude oil’ would reach ‘$100-600 million annually, in addition to an immediate boost in construction employment.’

“EPRINC estimated that annual net benefits from the KXL pipeline to Bakken producers and Gulf Coast refiners would range from $109.5 million to $584 million.”

A 2022 MRCTV mini-documentary, “Killing Keystone: How Biden & The Far Left Destroyed American Energy Independence,” shows how the pipeline expansion, which was supposed to run from Canada south though the Midwest United States to refineries at the Gulf of Mexico, would have created tens of thousands of jobs and pushed America further towards energy independence.

The report highlights news stories on the pipeline, including its energy, jobs, and economic impact, as well as interviews with U.S. workers and public officials who discuss how its cancellation has hurt their communities.