Bette Midler Fantasizes About Three Republicans Being Lost at Sea: ‘This Isn’t a Joke Setup’ 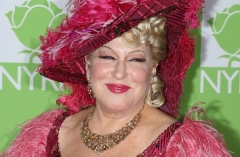 Outspoken liberal actress Bette Midler said Tuesday that she’s “fantasizing” about three Republican members of Congress getting lost at sea, and that she isn’t joking.

“#MarjorieTaylorGreene, #JoshHawley, and #LaurenBoebert are all in a boat, lost on the ocean.... Oh, this isn't a joke setup, I'm just fantasizing.”

In December, Midler used Twitter to post a sarcastic response to the news that Rudy Giuliani had been diagnosed with the coronavirus, as well as to claim that both the former mayor Giuliani and Pres. Donald Trump “should be charged with murder.”