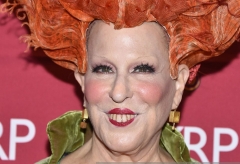 First, liberal activist and entertainer Bette Midler smeared West Virginians because Sen. Joe Manchin (D-WV) wouldn’t vote for Democrats’ $1.75 trillion “Build Back Better” plan. Then, she “apologized” by implying that they were just too dumb to know what's best for them.

Midler slurred West Virginians by calling them “poor, illiterate and strung out” – and said that Sen. Manchin wants to turn all Americans into the same type of poor, strung-out illiterates – in a tweet on Monday:

“What #JoeManchin, who represents a population smaller than Brooklyn, has done to the rest of America, who wants to move forward, not backward, like his state, is horrible. He sold us out. He wants us all to be just like his state, West Virginia. Poor, illiterate and strung out.”

Midler began her tweet by suggesting that the state of Virginia is too small to have such significant influence on national issues, since it has fewer citizens that Brooklyn.

After receiving backlash for her attack on West Virginians, Midler posted an apology, blaming her comments on her contempt for Sen. Manchin and “his whole family.”

She then suggested that West Virginians were simply too obtuse to vote for vote for a candidate “who has the state’s interest at heart” – even though a better candidate was out there:

“I apologize to the good people of WVA for my last outburst. I’m just seeing red; #JoeManchin and his whole family are a criminal enterprise. Is he really the best WV has to offer its own citizens? Surely there’s someone there who has the state’s interests at heart, not his own!”