Bank Tells Customers to Close Accounts if They Don’t Like Employees’ New Pronoun Badges – So, They Do

Customers complained after a bank announced that its employees have begun wearing badges advising patrons of their preferred pronouns, so the bank responded by saying it doesn’t want the business of people who don’t share its values.

“Pronouns matter. #ItsAPeopleThing,” Halifax Bank, a British enterprise and division of the Bank of Scotland, tweeted last Tuesday, providing a picture of the pronoun badge of “Gemma.”

Responding to customers’ objections, Halifax tweeted that those who disagree with the company’s values can take their business elsewhere:

"We strive for inclusion, equality and quite simply, in doing what's right. If you disagree with our values, you're welcome to close your account."

The bank has even gone so far as to provide instructions to customers about how they can close their accounts, by either calling or submitting written requests.

“Halifax customers are closing their accounts en masse today after its social media team told them to leave if they don't like their new pronoun badges for staff in what is being branded one of the biggest PR disasters in British business history.

“One account holder told MailOnline they have already pulled out investments and savings worth £450,000 while many more said they are closing ISAs, cutting up credit cards or transferring balances to rivals after they accused the bank of 'alienating' them with 'pathetic virtue signalling'.” 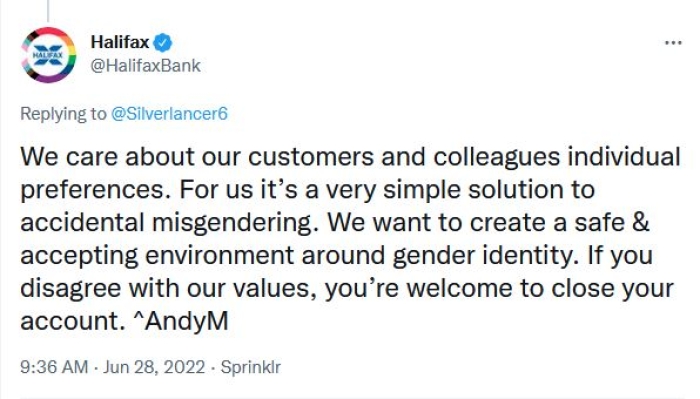 Halifax is not the only bank to institute a pronoun policy, though it may be the first to publicly reject customers who don’t embrace it. Natwest, Nationwide and HSBC, for example, also have optional pronoun policies. HSBC has even tweeted its support for Halifax in light of the customer blowback.

Halifax claims the pronoun badges are a means to promote discussion of gender identity and prevent customers from accidentally “mis-gendering” its employees, BBC reports:

“The bank later said in a statement: ‘We want to create a safe and accepting environment that opens the conversation around gender identity.

“‘We care about our customers' and colleagues' individual preferences so, for us, it's a very simple solution to accidental mis-gendering.’" 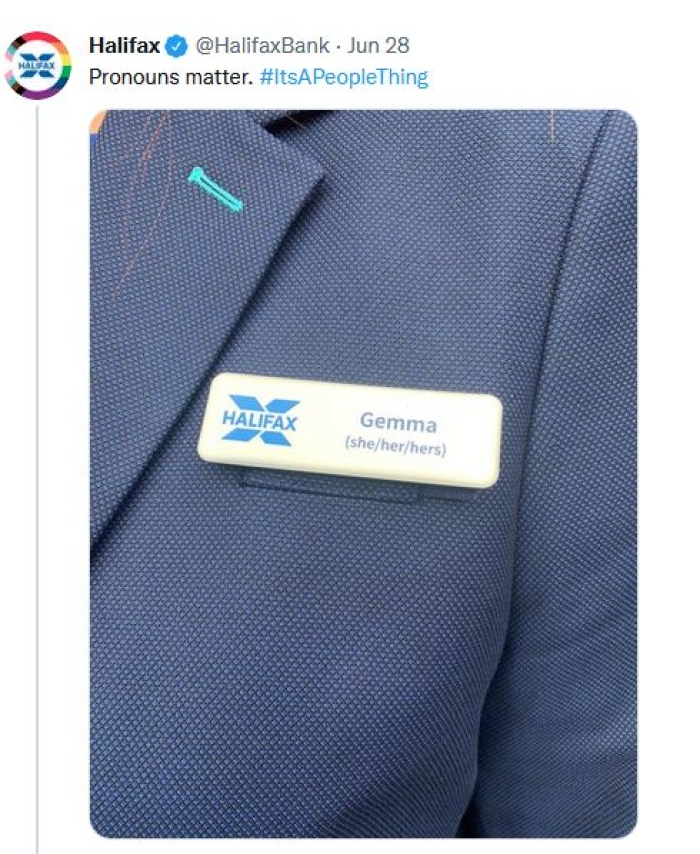