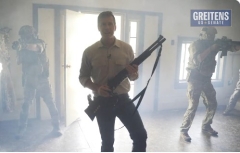 “We are sick and tired of the Republicans in Name Only surrendering to Joe Biden & the radical Left. Order your RINO Hunting Permit today!” a Monday post on Greitens’ Twitter page says, introducing the video.

We are sick and tired of the Republicans in Name Only surrendering to Joe Biden & the radical Left.

“I’m Eric Greitens, Navy SEAL - and, today, we’re going RINO hunting,” he says, cocking his weapon, at the opening of the video.

The RINO [Republican In Name Only] feeds on corruption and is marked by the stripes of cowardice,” Greitens says, as a team of rifle-wielding soldiers break down a door and throw a smoke bomb into a building, which they enter, posed to fire.

“Join the MAGA crew: get a RINO hunting permit,” Greitens invites viewers. “There’s no bagging limit, no tagging limit – and, it doesn’t expire until we save our country.”

“GET YOURS TODAY AT WWW.ERICGREITENS.COM,” the graphic at the end of the video says.

The video describes Greitens as a “conservative,” “outsider,” and “Navy SEAL.”

In 2020, during her successful run for Congress, Rep. Marjorie Taylor Greene (R-Georgia) riled liberal media and politicians by releasing a less-menacing campaign video, in which held a semi-automatic rifle while warning ANTIFA terrorists to “Stay the hell out of northwest Georgia.”

“You won’t burn our churches, loot our businesses or destroy our homes,” Greene said in her video.

But, while Greene was issuing a warning to terrorists, Greitens’ video portrays hunting – of fellow Republicans.