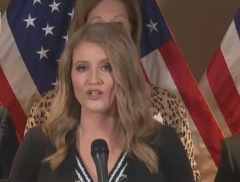 “We go through a jury process – this is the court of public opinion,” Senior Legal Advisor to the Trump Campaign Jenna Ellis told hostile reporters Thursday at a media briefing regarding the campaign’s election integrity lawsuits.

Ellis reminded the reporters that they are journalists, not jurors - if they were, she’d have 99% of them disqualified because of their bias evidenced by “the fake news coverage you provide.” What’s more, because they’re not judges, their opinions don’t matter, Ellis said:

“You are not unbiased jurors and until you step out of your role as a journalist and actually go into a courtroom and you are a judge on a bench that has sworn an oath to be unbiased in our separation of powers, then your opinion doesn’t matter.”

Ellis called on the reporters to adhere to journalistic standards by reporting facts, not opinion, and by covering the evidence provided at Trump’s media events truthfully:

“The facts matter, the truth matters and if you are fair reporters, you will cover that fairly and appropriately and you will allow coverage of our media team here and of our legal team.

“That is absolutely shocking that all you cover are around-the-margins and I’ve seen all of you taking pictures right now and I can anticipate what your headlines are going to be.

“If you are not willing to talk about the evidence that has been presented, then that is absolutely unacceptable for journalistic standards.