AOC: It’s Hard to ‘Be a Normal a Person Surrounded by So Much Decay and Moral Emptiness’ 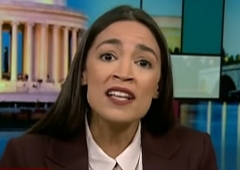 “It’s just really wild to be a person that works in a corrupt institution, which is what Congress is,” Rep. Alexandria Ocasio-Cortez (D-NY) said Friday a video live-streamed on Facebook.

What’s more, it’s hard to be normal when you’re working amidst such “decay and moral emptiness” on both sides of the aisle, the congresswoman says:

“And, to try and be a normal person surrounded by so much decay and moral emptiness that, frankly transcends party, is very difficult.”

And, even though thinking about the tragedy of mass shootings is keeping her up at night, “It’s not just gun violence” that Congress is unable to address, Ocasio-Cortez says. Because, even when members of Congress unanimously, or overwhelming, agree on something, they still “can’t get their sh*t together,” she says:

“And, the thing is, is like, it’s not just gun violence.

‘There’s so many different areas and issues where all of us agree – if not all, an overwhelming amount of us agree - and, Congress still can’t get their sh*t together.”

What’s more, Ocasio-Cortez says, she doesn’t want to be “one of those ding-dongs” telling people the answer is simply to “vote harder,” because solving the country’s problems is a difficult task:

“And, I don’t want to be one of those ding-dongs that just tells you to vote harder, because the solution’s a lot bigger than that. And, it’s going to take a lot more of us, and from us, to fix this.

“This isn’t just about voting harder. This is about doing a lot more than that. And, we have a long ways to go.”