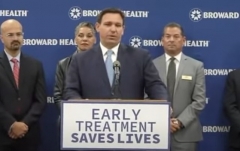 While Rep. Alexandria Ocasio-Cortez (D-NY), her media allies, and fellow Democrats were accusing Republican Florida Governor Ron DeSantis of being on “vacation,” and nowhere to be found during a pandemic, DeSantis was actually on the job – except for the day he took off to be with his wife during her chemotherapy treatment.

"Hasn’t Gov. DeSantis been inexplicably missing for like 2 weeks," Ocasio-Cortez tweeted on Friday. "If he’s around, I would be happy to say hello. His social media team seems to have been posting old photos for weeks," she added.

Turns out, Ocasio-Cortez was actually the one vacationing in Florida last week, where she was twice caught socializing in public places without a mask – most recently, in a crowded drag bar, as The New York Post reports:

“The far-left lawmaker (D-NY) was spotted maskless once again in Florida, this time at a packed drag bar in Miami — as the Big Apple continued to be hammered by record-high numbers of COVID-19 cases and faces an indoor mask mandate for one more month.”

“’AOC is STILL lounging it up in Florida, in large crowds and maskless,’ tweeted Brendon Leslie, the reporter who initially posted the video to social media. ‘This time at a Drag Queen bar in Miami. Rules for thee but not for me.’”

Likewise, MSNBC Host Joy Reid tweeted that Gov. DeSantis was “sunning his belly on vacation” instead of carrying out his duties, declaring that “@GovRonDeSantis is the Nero of Ted Cruzes."

At a Monday press conference, Gov. DeSantis responded to the accusations by noting that all of his activities had been posted on his office’s public calendar – for all the world to see – except for the one day he spent by his wife’s side at her cancer treatment:

“Wednesday, there was nothing on the calendar, so they’re like, ‘Oh, my God, he’s on vacation!’ And I’m like, you know, I just looked at my wife and I’m like, ‘Going to the hospital, uh, with you is not a vacation for you, I know that.

“And, it is not a vacay. This is something that, as a husband, I think that I should be doing.”

Gov. DeSantis reported last year that his wife had breast cancer. Since that time, he’s been with her at all of her cancer treatments, the governor said at Monday’s press event:

“I’ve accompanied her to all her chemotherapy treatments. And, she’s there for a long time. I mean, you know, I’m there most of the time, but it’s a draining thing. When she’s done with it, you know, it’s not something that’s great to see.

“And so, I just think a lot of people – particularly people who have gone through breast cancer treatment – the notion that that would be considered a vacation, I think is offensive to a lot of those folks.”

“I think it was dumb, there was a foot-fault obviously on their part, it wasn’t effective,” the Republican governor said of liberals’ false accusations.

DeSantis concluded by suggesting that he is actually fortunate to have such incompetent enemies:

“When you’re in a political arena, sometimes, you’re fortunate in the enemies that you have, because, you know, these are folks that just are not shooting straight right now.”