Skip to main content
FBI Director: "We recently arrested over 600 gang members in a single month. That's just one month..." 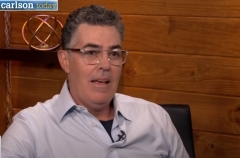 President Joe Biden’s divisive rhetoric is reckless, irresponsible and “sort of insane” – and defending him for having good intentions is like defending a drunken pilot – conservative comedian Adam Carolla says.

Whether he means to, or not, it’s dangerous and “sort of insane” for Biden to say “horrible, divisive things” that are dividing Americans, Carolla said:

“And, when he’s talking about Jim Crow 2.0 – I heard him, the other day, saying certain nations are being pulled back, there are certain states that are being pulled back into a Jim Crow, where they’re going to ask Black people to count jelly beans before they can vote.

“It’s really sort of the equivalent to your pilot being drunk. Sort of like: “Well, he’s not a bad guy.” I know: but, he’s drunk; he’s flying an airplane. ‘Yeah, so he drinks a little. He has a co-pilot.’

“It is kinda that, you know what I mean, it’s like: ‘Well, he doesn’t want to kill anybody.’ Yeah, I know – but, he’s a drunken airline pilot.

“That’s what Biden is doing. He’s just saying horrible, divisive things that have us going at breakneck speed apart from one another.”

Politicians defend Biden’s rhetoric because their goal is power, not prosperity, so they don’t care if people are fighting in the streets – and corporations embrace it because they don’t know “what the end-game is,” Carolla said:

“And the politicians have figured out, the corporations have figured it out, that, you know – cola and airlines and all that – they’re all racing this direction. And, I don’t think they know what the end-game is.

All Americans have to do is go on YouTube to find evidence that Pres. Biden and Vice President Kamala Harris don’t actually mean what they say, Carolla said:

“And, I don’t believe a thing that Biden says, or Kamala Harris says. Kamala Harris, she’s up there with Biden in terms of, does she believe what she says?

“Well, one little interesting test to figure out whether they believe what they’re saying is just go on YouTube and see them saying exactly the opposite four years ago, or two years ago, or 18 years ago.

“How could they believe what they’re saying?”