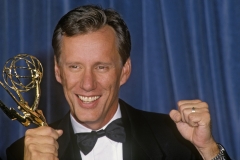 When conservative Emmy Award-winning Actor James Woods noticed Sunday that the Twitter hashtag #ObamaGate was trending, he posted a tweet discouraging readers from expecting too much from the potential exposure of any information connecting Pres. Barack Obama to his administration’s FBI efforts to target members of President Donald Trump’s team, such as former national security adviser Gen. Michael Flynn.

“Republicans have no will to fight,” Woods warns while introducing a new hashtag: #GutlessBlowhards:

“While #ObamaGate resonates as a Twitter hashtag, the sad reality is that this attempted “soft” coup d’etat will be a footnote to history. Why? Because Republicans have no will to fight. #GutlessBlowhards”

On Saturday, Woods proposed to Twitter readers that, if they’re willing to acknowledge that former FBI Director J. Edgar Hoover targeted civil rights leaders like Dr. Martin Luther King, that they should also accept the possibility that the FBI could also target Pres. Trump:

“If you accept that Hoover targeted Martin Luther King, would you likewise accept the possible targeting of President Trump?”