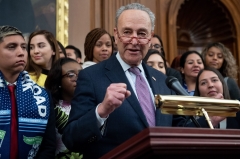 In video from March of 2020, Sen. Schumer tells Justices Kavanaugh and Gorsuch that they “will pay a terrible price” and “won’t know what hit you,” if they vote to uphold a Louisiana law requiring doctors to acquire hospital admitting privileges in order to perform abortions:

Schumer's threat to "hit" Justices Kavanaugh and Gorsuch and make them "pay the price" is considered particularly ominous, since Supreme Court justices are appointed for life and, thus, cannot be fired or voted out of office.

At the time, Chief Justice John Roberts responded to Schumer's threats by issuing a statement saying that members of the court will not be intimidated.

Immediately following news of Wednesday’s arrest, the 2020 video of Schumer’s threat resurfaced and began being shared on social media, particularly by conservative leaders.

“Cause and effect,” Sen. Ted Cruz commented in a tweet sharing Townhall’s tweet of the video of a Fox News report.

”I wonder if @chuckschumer is still proud of personally threatening Supreme Court Justices now that people with guns are showing up at their houses to kill them," Sen. Josh Hawley (R-MO) tweeted, introducing the video.

On Facebook, the 2020 video was promoted by media personalities, such as Fox News Host Sean Hannity, and members of Congress, including Sen. Roger Marshall (R-Kansas).