1,500 Mathematicians Call on Colleagues to ‘Boycott Working With Police Departments’ 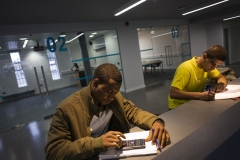 A letter signed by 1,500 mathematicians is calling on the profession to stop aiding the nation's police departments.

“In light of the extrajudicial murders by police of George Floyd, Breonna Taylor, Tony McDade and numerous others before them, and the subsequent brutality of the police response to protests, we call on the mathematics community to boycott working with police departments.

“This is not an abstract call. Many of our colleagues can and do work with police departments to provide modeling and data work.”

“Given the structural racism and brutality in US policing, we do not believe that mathematicians should be collaborating with police departments in this manner.”

The letter was created to advance a political goal, one of the letter’s authors says.

"Mathematics is very political," Math Professor Aougab said. "And it's being used actively right now for oppression." In response, Aougab says his math cohort is working "to further a goal that we inherently believe in politically," Inside Higher Ed reports:

“Tarik Aougab, a math professor at Haverford College and one of the letter writers: "We're using our mathematical knowledge and connections to further a goal that we inherently believe in politically." Aougab said he personally feels police as an institution should be abolished, an opinion that is moving more into mainstream conversation.”