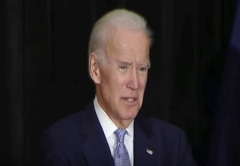 “How do you know what motivates company business decisions?” a coalition of 10 oil and natural gas trade associations asked President Joe Biden after Biden claimed that companies were refusing to pump more oil, in order to increase their profits.

Last Friday, the coalition sent a letter to Biden, urging him to stop falsely blaming oil and natural gas companies for not producing more due to greed when, in fact, it is his administration’s anti-energy policies that are responsible.

The letter seeks to address “repeated distortions and half-truths that have been expressed by White House officials” and to “set the record straight and provide a bit of context on statements that have been made regarding energy production,” the coalition writes.

In particular, the letter cites Biden’s March 11, 2022 attack on their industry:

“[I]t’s regrettable that you and your White House team have continued to mischaracterize facts regarding our industry – often maligning our motives, and frankly, in some cases, advance complete and total falsehoods.

“For example, you have said oil companies could be drilling right now because we have over 9,000 approved permits, a misleading statement at best. More about that below. Also, just last Friday, you said that companies ‘would rather take those profits and buy back their own stock rather than take that money and invest it in pumping new oil.’

”With respect, Mr. President, how do you know what motivates oil company business decisions?”

”Perhaps the worst mischaracterization of all by you and your administration is when you have said that you are doing nothing to hold back energy production. That is just not true,” the letter says.

”[T]he words and actions of you and members of your administration” are hindering the effort to produce adequate energy, the coalition tells Biden.

“Language and facts matter,” the coalition says, noting that the Biden Administration had mistakenly claimed there were over nine thousand unused leases the industry could be utilizing when, in fact, those were actually permits.

Even so, employing permits requires additional government approvals that can take years to acquire. What’s more, the Biden Administration’s opposition to pipeline construction stands in the way of delivering oil and natural gas to the public, the letter explains:

“There are 4,621 permits to drill awaiting approval by the Department of the Interior’s Bureau of Land Management. Your appointees could approve these permits now, enabling companies to forward with development.

“So, yes Mr. President, your administration is ‘holding the industry back’ in direct contradiction to your statements last week when you said your administration was not.  The most recent example: according to published reports this week, the US Bureau of Land Management approved 95 permits to drill in January 2022, compared with 643 in April 2021 – the height of the pandemic.”

“If you want to truly be helpful, pick up the phone and direct Secretary Haaland to approve the permits immediately. We stand ready to assist in any way possible,” the coalition urges.