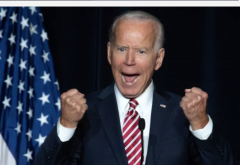 The major television networks and the New York Times and The Washington Post are now projecting that Joe Biden will be the president of the United States.

The headline on the website of the New York Times this afternoon reads: "BIDEN BEATS TRUMP."

The Electoral College map on the Times's website as of 1:10 p.m. Saturday showed Biden with 279 electoral votes and Trump with 214 with 45 remaining undetermined. The Times's analysis put Biden over the 270 threshold needed to win by awarding him Pennsylvania and Nevada. As of 1:10 pm, the Times had not called Georgia, North Carolina or Arizona.

A statement posted above the Times's Electoral College map said: "Editors at The New York Times will take into account a number of factors before declaring a winner, including race calls made by The Associated Press and Edison Research, as well as analysis of the votes that have been reported so far. State officials in Arizona, Georgia, Nevada and Pennsylvania have said they will continue to report more votes."

The was an 0.5 percent margin with 2 percent of the vote outstanding.

According to the New York Times Pennsylvania map, only 97 percent of the vote has been counted in the City of Philadelphia.

At 1:25 pm on Saturday, the headline on The Washington Post said: "BIDEN DEFEATS TRUMP."

Washington Post's electoral map had awarded Pennsylvania to Biden but not Nevada, giving him 273 electoral votes to Trump's 2014. The Post's page that came up when the state of Pennsylvania was clicked on its map said: "Joe Biden (D) has won. An estimated 95 percent of the votes have been counted."

According to the Post 5 percent of the Pennsylvania vote remains to be counted--compared to the New York Times's estimate of 2 percent.

At the same time, the headline on the website of Fox News said: "BIDEN WINS." The subhead said: "Biden projected to defeat Trump, become 46th president, set to address the nation tonight."