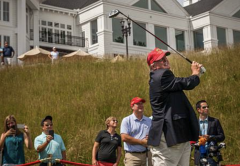 Donald Trump at the opening of the Trump National Golf Course in Sterling, Va., June 23, 2015. (Photo by Jeffrey MacMillan for The Washington Post via Getty Images)

President Donald Trump sent out a series of tweets on Memorial Day striking back at the media for what he argued was the predictable and biased way it covered the golf outings he took on Saturday and Sunday.

“Some stories about the fact that in order to get outside and perhaps, even a little exercise, I played golf over the weekend,” Trump said. “The Fake & Totally Corrupt News makes it sound like a mortal sin—I knew this would happen!

“What they don’t say is that it was my first golf in almost…3 months and, if I waited 3 years, they would do their usual ‘hit’ pieces anyway,” Trump continued.

“They are sick with hatred and dishonesty,” he said, “They are truly deranged! They don’t mention Sleepy Joe’s poor work ethic, or all of the time Obama spent on the golf course, often flying to…Hawaii in a big, fully loaded 747, to play.

“What did that do to the so-called Carbon Footprint?” Trump asked.“He also played moments after the brutal killing by ISIS of a wonderful young man,” said Trump. “Totally inappropriate—and it was me who shattered 100% of the ISIS Caliphate.

The Washington Post ran a story on Monday, for example, that carried this headline: “On a weekend dedicated to war dead, Trump tweets insults, promotes baseless claims, and plays golf.”

“Although Trump on Friday had called for worshipers to return to church in person this holiday weekend, the president did not. He played golf on Sunday morning,” the Post said.

Similarly, the New York Times ran a piece on Monday that carried this headline: “Trump Tweets and Golfs, but Makes No Mention of the Virus’s Toll.”

A protestor holds up a sign as President Trump departs the Trump National Golf Course in Sterling, Va., on May 24, 2020. (Photo by MANDEL NGAN/AFP via Getty Images)

The story in the Times began as follows:

“As President Trump’s motorcade pulled into his golf club in Virginia on an overcast Sunday, a small group of protesters waited outside the entrance. One held up a sign.

“Mr. Trump and his advisers have said that he does, but he has made scant effort to demonstrate it this Memorial Day weekend.”