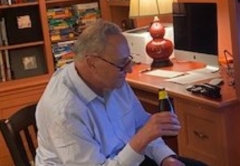 Senate Majority Leader Chuck Schumer (D.-N.Y.) sent out a tweet on Sunday that included a photo of himself within a few feet of a television set—with a bottle of beer in his right hand.

“Excited to be watching the Oscars with an ice-cold plant-based beer,” Schumer said in his tweet.

“Thanks Joe Biden,” he said.

“Speaking of stupid. There’s a study coming out of the University of Michigan which says that to meet the Biden New Green Deal targets, America has to—get this--America has to stop eating meat. Stop eating poultry, fish, seafood, eggs, dairy, and animal-based fats. Okay, you got that. No burgers on July 4th. No steaks on the barbie. I’m sure Middle America is just going to love that. Can you grill those Brussel sprouts? So, get ready, you can throw back a plant-based beer with your grilled Brussel sprouts and wave your American flag. Call it July 4th green. Now, I’m making fun of this because I intend to make fun of it. This kind of thinking is stupid. It comes from a bunch of ideological zealots, who do not care one whit about America’s well-being, not one whit.”