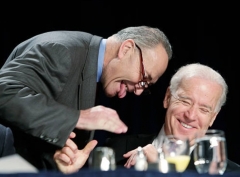 Senate Minority Leader Chuck Schumer (D.-N.Y.) sent out a tweet on Sunday night saying that Joe Biden will be the next president no matter “how many conspiracy theorists Donald Trump hires or fires.”

Jake Tapper said in the tweet that Schumer forwarded: “This attempt by Trump’s legal team—[Rudy] Giuliani, [Jenna] Ellis—to distance themselves from Sidney Powell’s insane conspiracy theories is going to be super awkward next time—oh, I don’t know—say, Trump Giuliani, or Ellis—tweet about the very same conspiracy theories.”

The Times story said in part:

“President Trump's campaign on Sunday disavowed Sidney Powell, one of his lawyers who has pushed false claims of voter fraud, after she made wild accusations that Republican officials had been involved in a payoff scheme to manipulate voting machines.

“The repudiation of Ms. Powell, which came at the hands of former allies like Rudolph W. Giuliani, added unwanted drama for the president's legal team at a moment when it is losing case after case, offering a public window into the chaotic nature and amateurish tactics of most of its attempts so far to fight the election outcome.”