Schumer: Intel Committee Report ‘Makes Crystal Clear the Relationship Between the Trump Campaign and the Russians Was Tight as a Drum’ 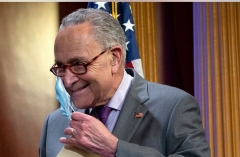 Senate Minority Leader Chuck Schumer (D.-N.Y.) sent out a tweet on Wednesday that said: “The bipartisan Senate Intelligence report makes crystal clear that the relationship between the Trump campaign and the Russians was tight as a drum.”

The tweet included a link to a story about the Intelligence Committee report that the New York Times published on Tuesday.

The headline on the New York Times report was: “G.O.P.-Led Senate Panel Details Ties Between 2016 Trump Campaign and Russia.”

The report said in part:

“Like the special counsel, Robert S. Mueller III, who released his findings in April 2019, the Senate report did not conclude that the Trump campaign engaged in a coordinated conspiracy with the Russian government--a fact that Republicans seized on to argue that there was “no collusion.”

“But the report showed extensive evidence of contacts between Trump campaign advisers and people tied to the Kremlin--including a longstanding associate of the onetime Trump campaign chairman Paul Manafort, Konstantin V. Kilimnik, whom the report identified as a ‘Russian intelligence officer.’…

“‘Mr. Manafort’s willingness to share information with Mr. Kilimnik and others affiliated with the Russian intelligence services “represented a grave counterintelligence threat,’ the report said.”